Desert Equinox: A convergence of solar and art in the outback

When 30 or more artists from Australia and countries worldwide collaborate together to hold and sculpture exhibition then you can expect a fantastic result.
But combine that with a prolific arts community in the middle of the outback, in a unique mining city like Broken Hill and you get an extra ordinary event.

Desert equinox is the result of that collaboration

A combination and interpretation of Solar powered Art by  international artists

Google desert equinox and you get a page full of results that will give you all sorts of information from many different perspectives.
But as an artist exhibiting in this unique event a newer version can emerge.

This project was a very different direction for my art. I had in the past broached installation and found object works but never sculpture. So when invited to participate an opportunity arose that I found challenging, and immensely enjoyable.

I love the sun, the light and the endless hues of colour over the outback landscape. The process to create one of my "suns" into metal was a huge challenge. I also have a connection to rustic objects which I collect, much to my husbands discontent. These rusty pieces of iron and metal hold an array of colours and textures that are replicated in my paintings. Often I found these patinas were influenced by the condition of the metal found object. If there was a deep scratch or dent in the metal, the elements of rust would be directed differently across the metal surface, occasionally bringing out marvelous textures and colour through line.
A started my idea with a large 1.2m piece of 5mm thick steel plate and a computer generated design.

An artist is generally poor, selling one peice of art to fund another and to be sponsored for such a experimental project is an inspiring opportunity.
Jamie Bolten from Boltons Engineering, Beryl St Broken Hill and his employee Tim gave me enormous support. Jamie used my design to plasma cut through the plate steel. To see what Jamie can offer go to www.boltonsengineering.com.au
From there it was up to me to take "Rays of Rust" from steel to Art.

The next step, a quick welding instruction course from my husband seen a mad artist I splattering flux here and there, burning holes into my base timber board with weld pools and eating up welding rods like a baby with a chocolate. Great fun!

My next process needed much more thought.
I needed to etch the steel to create the rays of the sun. Each ray needed to be etched at least 3-4mm deep in the steel plate if I was to achieve a rustic patina within lines.
Each etch was painstaking slow, taking 2 months to etch over 500 rays into the steel. Each ray needed to be in an exact line to influence the rusting so the line penetrated through the rust in the final process.
After blistering fingers, holes in gloves and aching arms the etching was complete.

The final finish was to hasten the rusting process and with assistance from my sponsor a large steel bed  was made to fit the plate, the plate lowered into a murky mixture. I sat and waited for results, checking daily and hourly, impatiently waiting to see what evolved.
This was now at "a make or break stage".
There was no time to redo the work should it fail. I had just over one week to installation day.

The result was more than expected and the plate revealed a doubled sided effect. The sun on one side and the textures of the earth on the reverse.
The birth of... 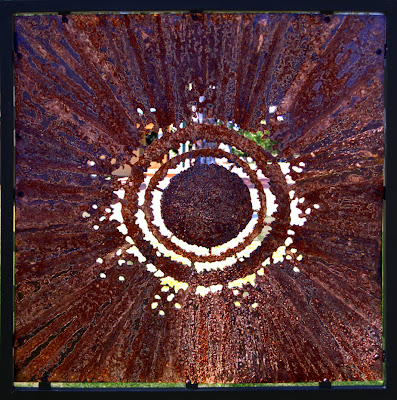 My involvement in Solar Desert Equinox was not restricted to just my work. I met wonderfully talented artists from all over the world. Thought provoking work by Alexandra Byrne, wings of polar rhythms suspended on poles that glowed like an aura through solar rays and Hamish Dunlop with his sculptured illuminated dogs howling at the Solar Moon by Peter Woodford Smith. 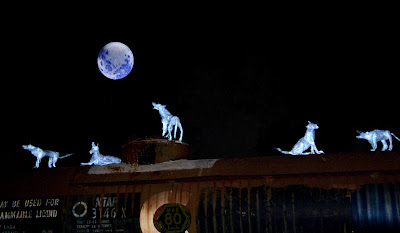 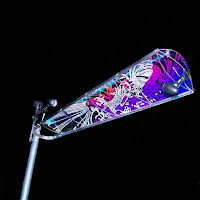 To my sponsor Boltons Engineering, Allan, Georgie, Shim and Susan of Desert Solar Equinox
I say thank you.
What a wonderfully inspiring project!

Deirdre enters The Vault Complex. The rear was dark, storage bays surrounded by solid grey concrete walls.there were thoughts of dread.  I headed upstairs.
My main cell was two tone in colour, facilities comfortable, surrounded by concrete walls but each cell had that atmosphere that started your heart to beat that little bit faster. I began to settle in, unpack my meager belongings.

Later I walked alone, past the existing cells, some were occupied, some were not. Each cell had the scent of an artist unknown and some walls were an extended expression of the artist within. My stomach felt that weird empty feeling, even though I had eaten earlier. I reached the end of the corridor, opened a large glass door and entered into a small room allocated as my "space". I liked this room. a room with no other attachment. A room where I could make mine. The window had no view, just concrete walls and iron but light spread its arms through the large glass panels throughout the room welcoming me.

Then I went down stairs again. I entered the main vault, steel bars of expression, framed, hanging lifeless; pieces of another artists soul waiting for it's rescuer from this concrete hold. Some echoed words to me, a connection with my own soul.Some hung at an awkward angle almost like it had given up finding a home.
The second vault was the same, rows on rows of steel bars, upright but confined with more hopeful expressions from another brush so I moved forward emerging into main room. This was a happier place, a place of vibrant imagery , to the right an alcove,  stainless steel benches and inky reminders of the last inmate.
I moved forward into "The Vault", the hub of Art, a large open room with white walls and to the left a small room. In front of me was a bustle of workers whose main aim was to arrange unknown artworks along the blank stark walls of the large room, to bring these walls of concrete into a living sense of expression.

The small room was black, blank and stark, in the centre a long armless seat. I sat. I contemplated how these darkened walls could come alive.

And so my exhibition and residency began at The Art Vault, in Mildura. 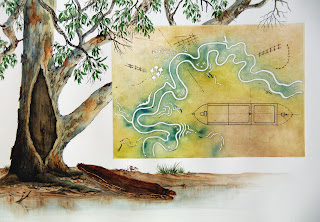 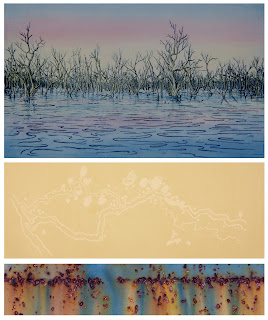 All works are hanging, the black blank walls filled with colour. My works sang to me encouraging me to be positive.
"River mapping" opened at The Art Vault. 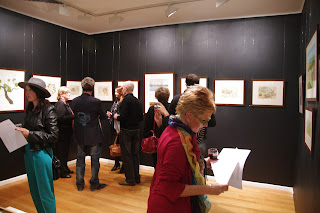 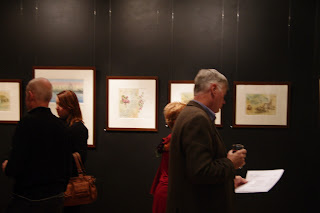 As an artist when you exhibit your works and are scrutinized by others being in a prestigious gallery on a residency can be daunting. By the 3rd day all seemed to be calm and my creative juices began to flow as I ventured into the landscape of the environs of Mildura and its surrounding countryside.
The staff at the Art Vault are so helpful in making you feel at home and after my first trip out I came back with a small collection of inspirational pieces to get me going. The empty white walls of the studio began to fill with sectional sketches from my mind.
My main focus was now on going to Mungo National park. I had never been there before so was excited about my visit.

MUNGO
An ancient earth, a world within another world.
I enjoyed Mungo immensely although the day was overcast and cold. At first the landscape of Mungo Lake looked very drab, no sunlight throwing colours, no shadows throwing form. As we drove up into the sand hills and through the "lunar landscape" a sense of wonder came over me. Nature had sculptured this landscape over millions of years and my camera captured the "moonscape" in contrast against the ominous storm clouds.
The "Walls of China" spread alongside the ancient Willandra lake beds and were cradled by immense dunes. The furrows and ridges flowed through the mind and onto my paper. I filled my Vault studio walls with sketches and began to create.

To truly connect  to this wonderful place an artist could not pass up a tour by two local indigenous guides who are ancestors of this lands of time. Great guys with a surmountable knowledge of the history, the footprints through the sands by past inhabitants, the existing protection in place and return of the land to their peoples.

This place & its history inspired me to start a series of embossed relief etchings which were created within The Vault.
The landscape of Mungo left a mountain of sketches, ideas and a series of artworks in mixed medium is in development in my own studio.
I would like to thank Julie chambers and staff Andrew, Robert, Mia and Trace of The Art vault for making my experience in The Vault a memorable one.
(and anyone I have missed who worked in and out during my stay) 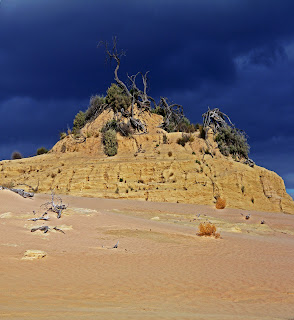